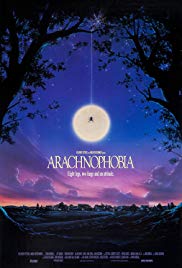 Storyline:
A large spider from the jungles of South America is accidently transported in a crate with a dead body to America where it mates with a local spider. Soon after, the residents of a small California town disappear as the result of spider bites from the deadly spider offspring. It’s up to a couple of doctors with the help of an insect exterminator to annihilate these eight legged freaks before they take over the entire town.
Written by
Shaun Ouimette <[email protected]>
User Reviews: Spiders are not a favorite of many people, something about eight legs does not appeal to the masses. The movie Arachnophobia plays on the fears of an audience, while mixing in enough humor to engage the viewer with a standard horror story. Jeff Daniels plays a big city doctor who moves out into the country to take over the practice of the soon-to-be retiring doctor who has served for about 140 years or so. The Daniels’ character is also scared of spiders, so when killer spiders enter the town, we have the standard ingredients to the standard horror movie. The spiders look convincing enough to scare almost anybody, and the exterminator, played by John Goodman, offers enough jokes to lead to an entertaining movie. There is nothing Earth-shattering about the film, but for popcorn season, this movie will not disappoint.