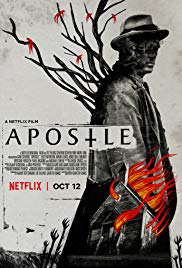 Storyline:
The year is 1905. Thomas Richardson travels to a remote island to rescue his sister after she’s kidnapped by a mysterious religious cult demanding a ransom for her safe return. It soon becomes clear that the cult will regret the day it baited this man, as he digs deeper and deeper into the secrets and lies upon which the commune is built.
Written by
ahmetkozan
User Reviews: I was really hyped up for this one – I loved both "Raid" parts & folk/cult subgenre is one of my favorites in all things horror. I was expecting a sort of mashup of "The VVitch" and "Wicker man" (the original, of course), but what I got is a sort of a Lovecraftian "Wicker man", which is totally not bad. Let’s start with the pros: amazing cinematography, decent acting, intriguing settings and well-done gore & fight scenes. That’s enough pros to make a movie average or better than that. But what was wrong? Mainly pacing & plot. This could’ve easily been a 90minutes long horror flick, without losing much of the atmosphere. "The Apostle" was shook by a set-up too long, consisting of many uninterrupted long shots, walking, watching, staring etc., they were making suspense and doing an overkill at that. What about the plot? It’s engaging enough (just enough), but ultimately fails to deliver some answers to some burning questions.
To sum it up, it’s an above-average Netflix original, a very decent horror film, average mystery drama & an entertaining watch for any folk/cult/religion/Lovecraftian loving horror fan. I give it a solid 7/10.