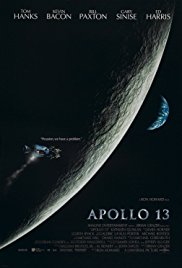 Storyline:
Based on the true story of the ill-fated 13th Apollo mission bound for the moon. Astronauts Lovell, Haise and Swigert were scheduled to fly Apollo 14, but are moved up to 13. It’s 1970, and The US has already achieved their lunar landing goal, so there’s little interest in this “routine” flight.. until that is, things go very wrong, and prospects of a safe return fade.
Written by
Rob Hartill
User Reviews: My first job as an engineering graduate in 1960 was with NASA. I was fortunate enough to have been a Project Engineer on the Apollo Program, and I am familiar with the technical aspects of the program. But this movie was not as much about the technical aspects of the program as it was about a thrilling, real-life drama that just happened to take place during a glorious time and a once-in-a-lifetime project. Despite all of the little technical errors, Ron Howard and his crew have put together a superb film, one that deserved the 9 Academy Award nominations which it received. I wish that present-day film-makers would concentrate on happy situations, like this one, instead of the constant barrage of drivel to which we, the movie-going public, are made subject. Long live NASA and long live courage!!