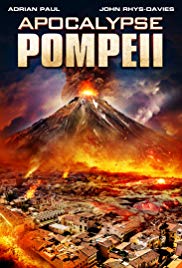 Storyline:
When a Former Special Ops commando visits Pompeii, his wife and daughter are trapped as Mt. Vesuvius erupts with massive force. While his family fights to survive the deadly onslaught of heat and lava, he enlists his former teammates in a daring operation beneath the ruins of Pompeii.
Written by
Anonymous
User Reviews: Apocalypse Pompeii is a production of The Asylum—a film production company known for making so-called ‘mockbusters’. These mockbusters are films that are released to coincide with the release of big studio epics in order to capitalize on the hubbub surrounding the big-budget movies. They feature titles that are VERY similar to the bigger films—and the movie poster for Apocalypse Pompeii looks an awful lot like that of the upcoming Pompeii! A few other examples of their films are Atlantic Rim, Death Racers, American Battleship, Snakes on a Trainand many others. They also are the same folks who have given us the Sharknado franchise. Because of this, it’s obvious the film will have a low budget and very modest pretensions—and most likely will be a film you’ll see coming direct to DVD. Despite all this, it is surprising to see that the film actually was shot, in part, in Pompeii as well asBulgaria?! Also, the plot is radically different from Pompeii—with the big budget film being set in ancient times and the mockbuster being set in the present.

The film begins with a prologue showing some Hispanic family fleeing in terror from a volcano eruption. Oddly, however, this has almost nothing to do with the film—a film set on the other side of the globe in Italy! After the credits roll, you see a family in Naples. The father has a business meeting and he’s brought his wife and teenage daughter with him. While he’s at his big meeting, the rest of the family goes to an outing to nearby Pompeii—site of a huge mega-explosion that killed thousands in 79 A.D.. Not surprisingly, soon after the pair arrives at Pompeii, the mountain explodes—and folks run for cover. Fortunately for those who teamed up with the wife and daughter is the fact that the teen knows MORE about volcanoes and how to survive them than a team of volcanologist!! This all-knowing girl, again and again, knows EXACTLY what to do and helps this group survive long enough for the father to become a Rambo-like action hero! The dad (of course) is some sort of ex-military genius and he instantly assembles a team to help him steal a helicopter from a military base (!!) and head to Pompeii to look for his family. If it sounds like the plot is stupid and filled with significant plot problems, then you are pretty much right on the mark!

So is the film 100% bad? No. As I mentioned above, it does have some actual footage of Pompeii. It also keeps your interest, as the pace and music work fairly well and SOME of the acting is competent. Unfortunately, the plot is stupid and the characters are shallow—often coming off as caricatures. I wouldn’t rush out to buy a copy or rent the film. Instead, I’d wait until it most likely shows up on the SyFy Channel and watch it if you have absolutely nothing else to do (and that includes washing your hair, checking your air conditioner filters and breathing).