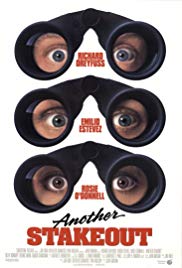 Storyline:
Chris and Bill are called upon for their excellent surveillance record to stakeout a lakeside home where a Mafia trial witness is believed to be heading or already hiding. Unlike their earlier _Stakeout_, this time they are accompanied by Gina Garret from the DA’s office and her pet rottweiler ‘Archie’; their cover, husband and wife with son Bill.
Written by
Rob Hartill
User Reviews: When a witness against the Mafia goes missing Chris and Bill are sent to stakeout a place where she may turn up. However this time they’re joined by Agent Gina Garrett and her dog. Despite their childish behaviour things will soon turn serious for the cops.

The first film was light, silly, unlikely but quite enjoyable and this one continues in a similar vein  albeit less successfully. The main failing is that the plot is the same as the first one and hence feels less fresh. On top of that we have cliché on top of cliché to add to the stale feel. The film is so desperate to repeat the first one that we even get Stowe roped back in on the side. The jokes are pretty tired and the action is quite tame overall the end result is not terrible but mediocre.

Dreyfuss and Estevez had good fun in the first film but here they look like they’re collecting the cheque. They are still OK but you can see they’re going through the motions a bit. O’Donnell should be sentenced to daytime TV forever  how can one person be so very brash and annoying? She sucks any lightness out of this film and is really irritating. Farina is good as is Moriarty (but it’s a long cry from Raging Bull isn’t it?), Ferrer turns in yet another bad guy role and is always value.

Overall this is barely entertaining. It doesn’t feel fresh and this cheapens it  the fact that the comedy is weak and that O’Donnell is like a curse from Hell makes it even worse. Stick with the first film  it’s not a masterpiece but at least it’s got energy.