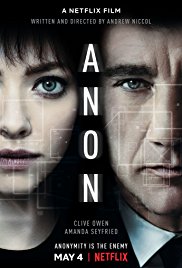 Storyline:
In a world without anonymity or crime, a detective meets a woman who threatens their security.
User Reviews: Andrew Nikkol again returns to his favorite topic (about) social science fiction. This time his fantasy creates a world of a near future, in which there is no longer any concept of anonymity. All the basic data about each person are in the public domain, and it’s enough just to look at the interlocutor to find out who he is and what he achieved in life. Also, each and every without exception there is a permanent visual recording of the events taking place with him, which is archived and located in the space of the Ether, from which the detectives of the special police apparatus have access to the memories. Every citizen now has become like an open book, which is easy to scan. This, of course, is for the benefit of society, reducing the number of crimes and finally reducing everyday life to the level of monotonous despondency. But what happens if someone can keep his anonymity? With such a problem and faces the protagonist of the film Saul Freeland, investigating a series of mysterious murders, in which the offender also forges inventive inventories of memories of his victims.

Referring to the topics of online surveillance and shadow total data verification by certain government agencies, the New Zealand director, however, does not risk digging a little deeper than what is originally offered to the viewer. "Anon" comes out with such a great generalization, the world of dominant conventions, starting from an unnamed place of action and ending with key plot points and characters. Substitution of reality here takes place not only in the eyes of Freeland, but also in the viewer – Nikkol seems to be returning to the scenery from his "Time", only changes the basic concept, introduces new, albeit unremarkable characters. Divorced, middle-aged detective with a classic set of tragedies of the past, depression, reflection, fatigue and alcoholism and his main opponent – lonely girl-hacker, sociopath, despises open society to which the glass walls of the world without privacy pressuring other stronger. The remaining types of the at least the templates, as well as conservative construction of the plot itself, in which everything is moving along predefined routes – from exposure, acquainting the viewer with the peculiarities of the activities of the protagonist and ending isolation, designed to cast a shadow over all this seemingly harmonious ranked utopian society.

Having on hand an excellent idea that could be developed well thanks to a fantastic assumption – around the clock functioning in the mind of each interface, Nikkol prefers to focus on things simpler. His "Anon" is basically a standard technotriller, in which the level of intrigue is reduced to a minimum, and to study the geometric proportions of the scenery is much more interesting than watching the actions of the characters. The film after the introductory first act is too quick to make a transition from words to deeds, with every step of starting to lose touch with their own reality. Technical details, if negotiated, are only casual, and the content side is gradually surrendered under the onslaught of minor, but more curious details. Study eclectic interior loft hacker opposed to the local geometry of the totalitarian urbanism, or notice how during a given scene the characters for various reasons, look away somewhere amusing, but this impression is not vyvezesh. Niccol brings his directing style – as if detached from the observation with the academic alignment staging diluted oblique angles and close-ups with a reduced degree of emotions only adds to the feeling of total emptiness of what is happening.
Of course, "Anona" could save the final twist, which can turn the languidly lined intrigue into another optical illusion for the dejected viewer, but in this component the plot only finally recognizes its helplessness. The need to believe what they saw in order to protect the system from collapse here is simply a banal attempt to avoid compromise, and cause-and-effect relationships remain without due attention. Nikkol decides to play in symbolic postmodernism, completely guarding the viewer from any answers, but his thoughtful defaults look more like the lack of an ideological opportunity to develop his own concept or lead him to a logical collapse. Increasing paranoia stabilizes by itself, mysterious algorithms and databases remain in the form of graphical links of digital paths, and all motivation turns out to be an ordinary model. After all, maybe Nikkol is right – it’s easier to get rid of the general in the finale and to impress the viewer that he already knows the answer, than to directly tell him the obvious conclusions. Accidents are nothing but whim, encryption of data is not reliable and it’s much easier to permanently disable the interface and get rid of annoying advertisements and dice with useful information, because memories somehow always remain with us. To delete a record, according to the characters of the film, is much easier than to get rid of its contents, and at some point it seems that a little more, and the story will hit at least in the parable, but this information anti-utopia seems to be still unrevealed.

Storyline:Set during the Heian Period, Kyo is a beautiful city that is proud of its glory. Two beautiful onmyouji meet, and the sad and short-lived beautiful cherry blossom starts to stir after 1000 years.User Reviews:

Storyline:A coven of devil-worshiping monks living in New York City search for victims for their sacrificial ceremonies.User Reviews: "Prime Evil" came in a boxed set of bad "b" movies. The hope wa...