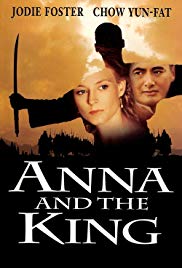 Storyline:
This is the story of Anna Leonowens, the English schoolteacher who came to Siam in the 1860s to teach the children of King Mongkut. She becomes involved in his affairs, from the tragic plight of a young concubine to trying to forge an alliance with Britain to a war with Burma that is orchestrated by Britain. In the meantime, a subtle romance develops between them.
Written by
Tommy Peter
User Reviews: Let the magic of romance and the beauty of Siam sweep and take you away to a world where the king rules the land and a teacher rules the king’s heart. There are only two other movies I would consider to be worthy of masterpiece status: "Saving Private Ryan" and "Titanic." Now a third can be added to this list: "Anna And The King." "Anna and The King" is a true masterpiece that is filled with heart & soul, a beautful setting and superb performances.

I was very impressed with the performance of Chow-Yun Fat because he made the transition from action star to dramatic actor flawlessly. Fat showed his versatility in playing a king. Fat pulled off this role with perfection. He made it so easy for me to enjoy this movie because of his screen presence and believability of the performance as well as the chemistry between Anna and the King.

This masterpiece can not be completed without the performance Jodie Foster turned in. Foster delivers the type of performance worthy of an oscar. She once again has established herself among the elite that have the special gift of natural talent.

Foster and Fat come together beautifully to bring the true story of the romance of Anna Leonowens and King Momokut. The chemistry can be felt from a distance and it works from the first minute they come together. I knew Foster and Fat were compatible; however, I failed to realize how much until I viewed the movie.

"Anna and The King" is visually stunning in so many ways with beautiful settings such as the palace. Also, the costumes are well-made and suited the movie perfectly. "Anna & The King" will take you on a journey that will touch, warm and fill your heart with spirit only a motion picture masterpiece can bring.