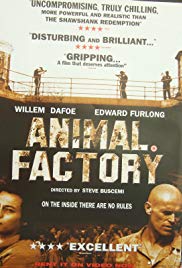 Storyline:
Ron, who’s young, slight, and privileged, is sentenced to prison on marijuana charges. For whatever reason, he brings out paternal feelings in an 18-year prison veteran, Earl Copan, who takes Ron under his wing. The film explores the nature of that relationship, Ron’s part in Earl’s gang, and the way Ron deals with aggressive cons intent on assault and rape. There’s casual racism, too, in the prisoners and the guards, a strike called by Black prisoners, and the nearly omnipresence of hard drugs. Ron’s lawyer is working on getting Ron out quickly, Earl has a shot at parole, and death seems to be waiting in the next cell. Will prison turn Ron into an animal?
Written by
<[email protected]>
User Reviews: Although the DVD cover draws attention to another great prison movie (The ShawShank Redemtion), ‘Animal Factory’ is actually closer in style and content the equally good ‘Midnight Express’. Without revealing the plot, Edward Furlong finds himself in deep trouble and is sent to prison for what emerges to be longer than his crime should permit. Here he meets and is befriended by Willem Defoe’s character, the prison gang leader of sorts. Furlong, young, alone and vulnerable finds himself taken under the wing of Defoe, which amongst other benefits’s, offers him some security against buggery. All the acting is first class, and the direction is snappy enough to keep the viewer entertained until the films climax. Keep a look out for Mickey Rourke’s fantastic cameo, had he been given more screen time he would have stolen the show. A must see.