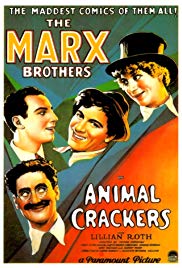 Storyline:
Captain Spaulding, the noted explorer, returns from Africa and attends a gala party held by Mrs. Rittenhouse. A painting displayed at that party is stolen, and the Marxes help recover it. Well, maybe ‘help’ isn’t quite the word I was looking for–this is the Marx Brothers, after all…
Written by
Ken Yousten <[email protected]>
User Reviews: Judging by the script, you’d never believe that "Animal Crackers" is over seventy years old. Think of all the "postmodern" things that happen in this movie: Groucho directly addresses the audience to apologize for a bad joke; Harpo shoots a gun at a statue, only to see the statue come to life and return fire; and Margaret Dumont freezes in time while Groucho has a "strange interlude" and rambles to the audience about the perils of marriage and living with your folks! Of course, the absolutely ancient and decaying print will remind you that "Animal Crackers" is older than the hills, but otherwise, it’s much fresher and weirder than the stuff that passes for comedy today.

Like "The Cocoanuts," this movie is based on a play, and as such it is considerably longer and stagier than most of the later Marx movies. The pace does drag a bit towards the end, especially since the plot disappears (along with Zeppo) for long segments at a time. But many of the individual segments are classic, including the often (and rightly) praised bridge game and Harpo’s gag with the cutlery-filled sleeves. Even the music segments hold up well, particularly Chico’s piano routine that gets savaged by Groucho.

Interestingly, there is a prominent romantic subplot to this film, which puts paid to the fallacy that Marx Brothers movies didn’t have romances until MGM got its hands on them. However, the romance isn’t nearly as intrusive or annoying here as in their later vehicles, so there’s still plenty of reason to be annoyed with good old MGM…