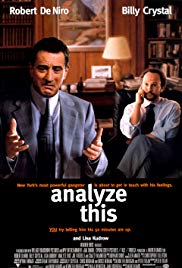 Storyline:
Ben Sobol, Psychiatrist, has a few problems: His son spies on his patients when they open up their heart, his parents don’t want to attend his upcoming wedding and his patients’ problems don’t challenge him at all. Paul Vitti, Godfather, has a few problems as well: Sudden anxiety attacks in public, a certain disability to kill people and his best part ceasing service when needed. One day, Ben unfortunately crashes into one of Vitti’s cars. The exchange of Ben’s business card is followed by a business visit of Don Paul Vitti himself, who wants to be free of inner conflict within two weeks, before all the Mafia Dons meet. Now, Ben Sobol feels somewhat challenged, as his wedding is soon, his only patient keeps him busy by regarding Ben’s duty as a 24 hour standby and the feds keep forcing him to spy on Paul Vitti. And how do you treat a patient who usually solves problems with a gun?
Written by
Julian Reischl <[email protected]>
User Reviews: This wasn’t "hilarious" as everyone told me it was, but it was still very enjoyable and pretty solid entertainment. Although a comedy, it has violence and a lot of profanity.

Robert De Niro, as usual, is excellent and once again surprises viewers with his comedic talent. He plays a mobster (familiar territory) but one who needs psychiatric help. He’s hilarious when he’s crying! His "shrink" is played by Billy Crystal, in an untypical low-key character role. My favorite in this film was Joe Viterelli, the fat guy-mobster who has a few very funny lines. Viterelli is one of these guys you see in a ton of gangster movies and is always interesting.

The female lead in here, Lisa Kudrow ("Laura") was not appealing to me, character-wise. Overall, a funny movie and much better than the sequel.

Storyline:Loosely connected stories capture a week in L.A. in 1983, featuring movie executives, rock stars, a vampire and other morally challenged characters in adventures laced with sex, drugs and violence. ...