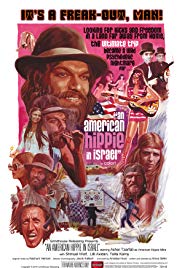 Storyline:
Incited by a disillusioned young man who has decided to flee from civilization, a group of 4 people go searching for freedom and happiness on an isolated island . When their boat goes astray and they are left without food, their animal instincts take over, bringing the film to its catastrophic end.
Written by
BFI
User Reviews: I believe that Markastzm’s review gets everything right, except one very thing. Indeed, he is correct that the mimes and the sharks both represent "The Man", and also that the film does not refute hippie ideals, but rather shows the unrelenting glee "The Man" takes in squashing those embracing those ideals. Markastzm is wrong, however, when he states that "Neither the characters, the actors, nor the director take themselves too seriously". There is an interview with two of the actors on the blu-ray disc and they indicate that took all of this very seriously, and that – to some extent – they all naively thought they were making a important statement. And it is precisely this that makes this film such a jaw-droppingly WTF oddity. Tedious to no end, but also fun in the right mindset with the right group of friends.

Storyline:Striving to be independent, the blind but determined Don Baker (Edward Albert) moves away from his overprotective mother (Eileen Heckart, who won an Oscar). After settling into his new San Francisco digs, Do...

Storyline:A small-town couple finds the perfect apartment in the big city, except there's one catch: the apartment is home to the ritualistic suicides of a deranged cult.User Reviews:

Storyline:Four sexy young foreign girls come to England as au pairs and quickly become quite intimate with their employers, host families, and just about everyone else they encounter.User Reviews:

Storyline:The last of Rohmer's Six Moral Tales. Frederic leads a bourgeois life; he is a partner in a small Paris office and is happily married to Helene, a teacher expecting her second child. In the afternoons, Frede...