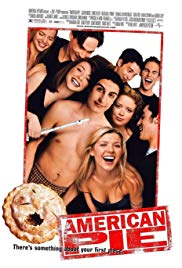 Storyline:
Jim, Oz, Finch and Kevin are four friends who make a pact that before they graduate they will all lose their virginity. The hard job now is how to reach that goal by prom night. Whilst Oz begins singing to grab attention and Kevin tries to persuade his girlfriend, Finch tries any easy route of spreading rumors and Jim fails miserably. Whether it is being caught on top of a pie or on the Internet, Jim always ends up with his trusty sex advice from his father. Will they achieve their goal of getting laid by prom night? Or will they learn something much different?
Written by
Film_Fan
User Reviews: "So high school boys everywhere only think about sex, huh?" my Japanese wife turned to me and said about 20 minutes into "American Pie." She looked at me expectantly, as if she wanted to hear me say I was somehow different, above such base pursuits. I could tell she was mildly disappointed when I replied, "Yeah, pretty much." Eighteen-year-old boys’ raging hormones is a truly universal theme.

There have been four American Pie films to date, not counting the straight-to-video releases. The film notably struck a chord with teens when it was released in 1999. I remember sitting in art class and overhearing a popular and attractive senior girl condescending to an awkward and geeky freshman boy, "You haven’t seen ‘American Pie’? The great American sex comedy?" I still cringe when I remember that.

If you haven’t seen it, it is basically about four senior boys who make a pact to lose their virginity before they graduate high school. They shrewdly determine prom is their last chance to get laid, and devote all their energy to getting a woman in bed at the after-prom party, to be held at the lake house of the cocky lacrosse player, Steve Stifler. The boys, particularly Jim, have a series of embarrassing mishaps along the way, one famously involving a warm apple pie.

"American Pie" set a new bar for teen comedies. Every teen comedy since has tried, and failed, to top the scene where Stifler unwittingly drinks a beer with a load of semen in it.

Though "American Pie" is famous for its numerous gross-outs, the movie is good, and not just gross, because we come to identify with the characters, and the humor rises naturally from the situations. The scene where Stifler slips laxatives into Finch’s mochaccino, causing him to make a desperate dash for the nearest toilet, is funny not because fart sounds are humorous, but because the film already established Finch’s aversion for public restrooms.

The Stifler character was especially believable. When Heather (Mena Suvari) asks out Oz (Chris Klein) in front of the lacrosse team, Stifler proceeds to make lewd gestures. Heather misinterprets this as Stifler making fun of her, when Stifler was really just trying to embarrass Oz. When I first saw the film at the age of 16, I thought, That’s pretty much how high school boys act.

The acting is serviceable. Eugene Levy, who plays Jim’s dad, and Seann William Scott, who plays Stifler, are totally convincing in their roles. (Toward the end of the film, watch Stifler in the background check his beer before he takes a sip.) Others, however, give flat performances, especially in dramatic scenes. However, since these scenes take back seat to the comedy, and few of the jokes fall flat from the acting, the mediocre performances don’t hurt the overall effectiveness of the film.

Another criticism I have of the film is one that pretty much applies to all Hollywood films, and that is that the kids are too rich. You can usually tell who the poor kid is in a Hollywood movie because he’s the one who’s not driving a late-model car. His family will still live in a two-storey house. Every student in "American Pie" (except for Oz, the only one shown to have a job), lives like the richest kid at my high school.

Overall, "American Pie" is an enjoyable comedy that will continue to be the standard against which all teen comedies will be judged. I recommend the unrated version. While scenes in most unrated or extended editions were cut from the theatrical releases for good reasons (i.e., they were tedious), the theatrical version of "American Pie" was really a sanitized version of the better, unrated version.