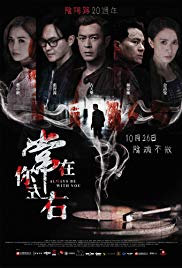 Storyline:
David a taxi driver who is doomed with cancer kills hotel owner Patrick in car accident, then Patrick’s girl friend takes over his hotel by the lake in Hong Kong. Where is haunted by serial suicidal accidents. The car accident which combined with suicidal act by a girl Xiao-Hong also instigates pick pocket, Zhi-qiang, police Sam’s spooky incidents.
Written by
Ryota Nakanishi
User Reviews: Ghost Anthology franchise, Troublesome Night is well known for 20 titles including this one. Anthology films provided opportunities for independently financed genre filmmakers of Hong Kong. It also developed the most important genre filmmaker Herman Yau who is seemed to be Hong Kong’s Tobe Hooper or Roger Corman.

Contrary to Troublesome Night (1997), this 20th.anniversary film ‘Always Be With You'(2017) is well marketed by Halloween campaign that audiences who take shots with ghost costumed staff at theaters can get 2,000 HKD. This kind of Thanks-for purchasing ticket campaign also does not depend on stars to appear at cinemas. It actually hit the first weekend box office.

About the film, you can see traditional anthology is well organized into ensemble form in this film practice. It proved that anthology film can be reorganised into seamless ensemble film.

All of them are full of suicidal topic, and the filmmakers successfully expressed humanistic emotions and emotional reality through paranoia-like personality and twisted plots in this film. The range and extent are something deeper or unusual than Hollywood films’ standard.

For example, you can see the taxi driver David who is doomed to uncuttable cancer tries to help Patrick’s girl friend from the serial suicide scandals at her hotel where Patrick owned and named as ‘Suicide Paradise’ by HK media. What he does is hiding dead bodies by cutting and splitting them to cover the incidents.

This film’s reality depends on urban legends that are popular among HK society. Mainly it’s ghost tale that ghosts who committing suicide by dropping off from typically high buildings. And also someone stealing dropped items is cursed by ghost. HK has no specific ghost character but the methods of involving curse is specific.

Film’s reality originally depends on real incidents, emotional reality and calculations of possibilities of certain dangers. We can see this film actually expressed our emotional reality. The main story of this ensemble drama is tale of Yu-xin and taxi driver Patrick.

Thank you all for this well made genre film of HK! Please keep it up!

Storyline:Nick Cheung plays a streetwise exorcist who becomes an overnight sensation when his extraordinary exorcisms are recorded and go viral on the internet. However, this attracts not only the attention from the m...