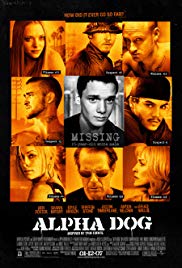 Storyline:
1999, Claremont, California. Middle-class kids, in their 20s, talk trash, wave guns, hang out in a pack. Johnny Truelove, drug dealer and son of a underworld figure, threatens Jake Mazursky, an explosive head case who owes Johnny money; Jake responds by breaking into Johnny’s house. On impulse, Johnny and a couple pals kidnap Jake’s 15-year-old brother, Zach. Zach’s okay with it, figuring his brother will pay the debt soon. Johnny assigns his buddy Frankie to be Zach’s minder, and they develop a brotherly friendship. Zach parties with his captors as things begin to spin out of control. Group think, amorality, and fear of prison assert a hold on the pack. Is Zach in danger?
Written by
<[email protected]>
User Reviews: ALPHA DOG is a film that will resonate with the younger generation as its theme of drugs, rap music and sex can be translated through out the world where a group of teens are angry, ignored and violent. Whether it is the San Fernando valley or the Silicon valley, young men and women with time and money to spend on drink, drugs and sex will find the film is very familiar to their life styles. Sad, but true.

The first two acts of the film the dialog is really crude and filthy, and really becomes tiresome, but in relation to young druggies, this is their way of communicating. As an adult, I found it difficult to have any empathy for the young "Alpha males" except for the brilliant role of Anton Yelchin as Zack. He is so wonderful in his role and captures the innocence of a 15 year old and his final horrifying scenes are ones to remember. And Ben Foster as Zack’s brother is sensational in a role that is both powerful and frightening at the same time.

I wish this film were one you could find some redemption for, but I felt none at the end and Sharon Stone is once again terrific in a small, but powerful role as the mother. The young cast is awesome and true to the angry youth of today.

Storyline:Vlad has just moved and joined one of the most famous magical schools in the world, where he meets fairies, witches, trolls and dwarfs. Him and his father are the first vampires in town, but he soon meets ot...

Storyline:When seriously ill teenager Milla falls madly in love with smalltime drug dealer Moses, it's her parents' worst nightmare. But as Milla's first brush with love brings her a new lust for life, things get mess...

Storyline:A gang of thieves plan a heist during a hurricane and encounter trouble when a cop tries to force everyone in the building to evacuate.User Reviews:

Storyline:How have you been? Takeshi's letter is delivered one each month to his younger brother, Naoki. Takeshi is serving a life term in prison for the crime that he had committed to save his brother. But the crime'...