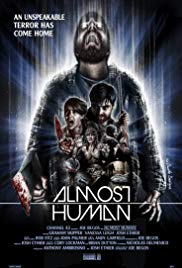 Storyline:
Mark Fisher disappeared from his home in a brilliant flash of blue light almost 2 years ago. His friend Seth Hampton was the last to see him alive. Now a string of grisly, violent murders leads Seth to believe that Mark is back, and something evil is inside of him.
Written by
Production
User Reviews: It seems like there exists an extremely strong desire among young and aspiring horror directors to travel back in time to the 1980s. Of all the "new" (2010 2017) horror movies I watched, almost half have of them either take place in the 80s or are a throwback in style and/or substance to that same decade. "Almost Human" is yet another example, set in respectively the years 1987 and 1989 and paying tribute to alien invasion and extraterrestrial body snatcher movies of that era. My guess is that these directors are nostalgic about their own youth and the classics that introduced them to the genre, and simultaneously they crave for making less complicated horror flicks in which they don’t have to bother with cell phones, social media, internet, etc

Speaking of young and aspiring horror directors, Joe Bigos is clearly an enthusiast genre fanatic himself and he undoubtedly watched all the classics as well as the obscure hidden gems worth seeking out; I’m sure of that. His film is straightforward and appealing, and he obviously gives priority to serving gore and entertainment rather than ensuring that his screenplay makes sense or doesn’t contain any giant plot holes. During a dark October night in Maine in 1987, Mark got sucked into a flashy blue light that came out of the sky and he disappeared right before the eyes of his girlfriend Jen and best friend Seth. Two years later, the two are still flabbergasted about what happened but try to move on with their lives when they suddenly hear the news of a vicious murder spree in the area. Seth immediately suspects that his missing buddy is responsible for the killings, and indeed, Mark has returned! The alienated, brainwashed and most likely anally probed Mark axe- murders his way back to his old house, but he stores his victims in the shed where they go through a sort of rebirth process in a cocoon. It’s probably best not to contemplate too much about all of the script’s shortcomings, stupidities and senseless details For example, what exactly is this alien race’s intention? To cleanse and repopulate the world one person at the time, starting in some random hole up in Maine? What alien race, in fact? We never see any aliens or spaceships, we only see our buddy Mark. And if Mark really has been replaced by an emotionless alien parasite with an earthly mission, then why does he insist on returning to his old house and hook up with his former girlfriend again? Anyway, there are far more questions than the screenplay ever bothers to answer, but the good news is that there’s a fair portion of gore and bloodshed to enjoy. The acting performances are so bad they become amusing again. Particularly the people in the supportive roles, like Jen’s new lover Clyde, are in desperate need of some basic acting lessons. "Almost Human" is very short less than 80 minutes and at least it’s never boring, so you won’t have the impression that you wasted precious time watching it.