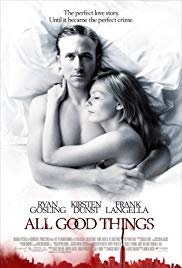 Storyline:
A love story and murder mystery based on the most notorious unsolved murder case in New York history. The original screenplay uses newly discovered facts, court records and speculation as the foundation for a story of family, obsession, love and loss.
Written by
Official Synopsis
User Reviews: In All Good Things, the director/writer has created a plausible fiction to account for a series of actual crimes. The evolution of the supposed killer from carefree youth to malignant immoralist is depicted, step by step. The strength of the movie as a story lies in its focus on a web of characters and their relationships to one another, rather than on the crimes themselves. We never see actual violence, but only its effects on characters, and their subsequent efforts to conceal the truth, to escape from their situation, or to satisfy some personal need. The movie functions mainly as a kind of indictment, and I wonder if it would work were it not for the ‘documentary’ angle, the movie as crusader for the truth, bringing to light the possible culpability of a real person, abetted by certain friends and family, a man as yet unpunished.

The motivations of this character, the object of the indictment, are accounted for in the course of the story, as various traumatic and painful incidents from his life are shown or recalled, and by allusions to deviant mental conditions or sexual preferences that are not. Whether these revelations are served up clearly or merely hinted at, they somehow fail collectively to satisfy as explanations for the barbarism that emerges as the story proceeds. At the end, the inner life of the putative killer remains obscure, a source of dissatisfaction for a movie that is about character.

So, not a great movie, but an engrossing entertainment if you are in the mood for a dark story that leaves you wondering how closely real events in fact matched up to this clever reconstruction.