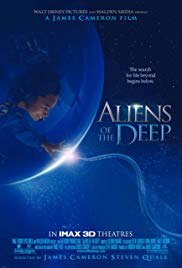 Storyline:
James Cameron journeys to some of the Earth’s deepest, most extreme and unknown environments in search of the strange and alien creatures that live there. Joining him is a team of young NASA scientists and marine biologists who consider how these life forms represent life we may one day find in outer space not only on distant planets orbiting distant stars, but also within our own solar system. Aliens of the Deep is the result of expeditions to several hydrothermal vent sites in the Atlantic and the Pacific. These are violent volcanic regions where new planet is literally being born and where the interaction between ocean and molten rock creates plumes of super-heated, chemically-charged water that serve as oases for animals unlike anything ever discovered. Six-foot tall worms with blood-red plumes and no stomach, blind white crabs, and a biomass of shrimp capable of “seeing” heat all compete to find just the right location in the flow of the super-heated, life-giving water or to fry …
Written by
Anonymous
User Reviews: When it comes to action movies, James Cameron is one of my favorite directors. In particular, "The Abyss" and "Terminator 2" are two of my all-time favorite movies. Like others, I’m disappointed to see that since "Titanic" Cameron is only making documentaries and I’m looking forward to see his "Battle Angel" (currently scheduled for a 2007 release), which will be his first feature in 10(!) years.

I didn’t really like "Expedition: Bismarck" and "Ghosts of the Abyss", so my expectations from "Aliens of the Deep" weren’t that high. Still, I got disappointed. I watched the 95-min DVD version and felt like I was watching a "behind the scenes" featurette of the real movie.

The movie promises to show us "aliens" from the bottom of the sea. It surprised me that during the entire duration, you don’t get to see more than 10 minutes of that – most of them are the same creatures. TV shows like the excellent "The Blue Planet (2001)" by the BBC already gave us all these creatures (and many others not shown here) in a MUCH clearer view and better photography.

Instead, this movie focuses on showing all the people and equipment involved in making the dives. It was interesting in the first 10 minutes and it would have been alright if I wanted to know more about the making of the movie. But it’s not interesting to see Cameron and crew for 95 minutes discussing how things should be made.

Except for the few short computer animations in the movie, I got a feeling that I was watching an unedited material. Cameron puts himself and lots of people with Ph.D. in front of the camera, but he is more interested in showing us them playing, making faces, modeling to the cameras and having really shallow discussions instead of giving some in-depth analysis of the subject.

Most of the underwater dialog consists of "Wow" and "That is amazing". The narration is horrible right from the beginning and the lowest point – for me – was during the explanation how these creatures were first discovered, which actually used the phrase: "These scientists went like ‘Wow!’".

Most of the underwater material shows the submarines and the people instead of the creatures. Is it because they didn’t find what they wanted and didn’t have enough material to shows us? When you finally get to see some creatures, you have absolutely no explanations about them. So many educated scientists around and you don’t even get to know the names of the creatures! You just watch it like you would if you dived yourself. Cameron himself sums it pretty well in one scene, when a beautiful jelly-like creature passes and he says "I have no idea what that is". I don’t blame you – you’re not a scientist, but what are all the people around for?

Summing it all up – this movie was a big disappointment and boring enough for me to fast-forward parts of it. If you want to see the creatures promised here, see another documentary; if you want to see a good Cameron project – go and watch any of his brilliant action movies. But save yourself from watching this.