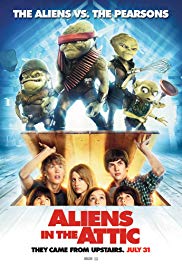 Storyline:
Stuart Pearson heads with his family to spend a summer vacation in Creek Landing, Michigan, with his brother Nathan Pearson and his sons and their mother Rose in an old lake house they had rented. When the television has trouble with the image, Stuart’s son Tom and the arrogant boyfriend of his sister Ricky Dillman go to the attic and then to the roof, where Tom meets his cousin Jake and they find the antenna dish totally destroyed. Sooner they discover four alien invaders that are preparing an invasion of the Earth that use a mind control weapon that only affects adults and they lock the quartet in the attic. Now they need to a find a way to force the adults to leave the house and discover the vulnerability of the invaders to plot a defense plan to save our planet.
Written by
Claudio Carvalho, Rio de Janeiro, Brazil
User Reviews: I am a mom with four children. My one-year-old didn’t go with us, but my five-year-old, ten-year-old, and twelve-year-old went with me to see this movie. I must say it was refreshing to see a children’s movie that was actually suitable for children to watch. We thought certain scenes were very cute and funny, there was no foul language, and my children enjoyed this film. It is sad that so many other movies get attention when this one is entertaining and clean. I would recommend it and think it is better than a lot of other summer films we have seen. On a scale of one to ten, I would probably give it a seven. That is an honest evaluation based on action, entertainment, humor, and story line. Overall, not a bad movie at all.