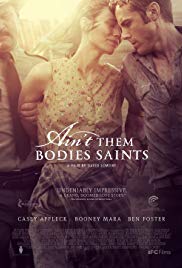 Storyline:
The tale of an outlaw who escapes from prison and sets out across the Texas hills to reunite with his wife and the daughter he has never met.
User Reviews: At his televised 80th birthday celebrations, the esteemed British director Sir David Lean had a message to young, budding film-makers: Listen to us; learn from us. Then do your own thing.

Debutant writer-director David Lowery has clearly been influenced by the American New Wave directors of the 1970s. And then done his own thing.

Ain’t Them Bodies Saints follows the relationship of Bob Muldoon (Casey Affleck) and his partner Ruth Guthrie (Rooney Mara). Besieged by local Police at an isolated farmhouse, the pregnant Ruth injures an officer in the shoot out. Bob Muldoon takes the rap for this crime and is incarcerated for a long stretch. Several years later, he affects an escape from the prison in which he is held and makes his way back to his home town in rural Texas.

There is very little back-story or explanation of events in this atmospheric film. This appeared to be a deliberate ploy by Lowery. Like the Curate’s egg, it was good in parts . But ultimately it left too much of the plot inchoate: who were the three men hunting down Muldoon? Bounty hunters? Erstwhile partners in crime? We weren’t privy to their motives and this detracted from the narrative. This was but one example. The very title of the film is also rather enigmatic and might lead some to believe the film is more bloodthirsty than it actually is.

Casey Affleck, who has enjoyed something of a patchy and sporadic acting career to date, is perfectly cast as Muldoon. As he showed in his Oscar-nominated performance in The Assassination of the Outlaw Jesse James by the Coward Robert Ford, Affleck has a great ability to convey a threat of violence without displaying any physical intimidation. He does so again in this film exuding a latent and uneasy menace. Hopefully this role will prove a springboard for Affleck and give him some momentum he has good screen presence.

There was also a strong performance from Rooney Mara and support from Ben Foster and Keith Carradine.

The cinematography was, on the whole, superb. Long linking shots in subdued colour gave a great feel for the small town Texan setting amidst arable farmland. The wonky camera shots for the close ups we can put down to current, hopefully soon obsolete, fashion.

And if the pacing was a little on the slow side at times, well David Lowery is still learning his craft.

This is a very promising debut from a rookie director. He is one to watch.