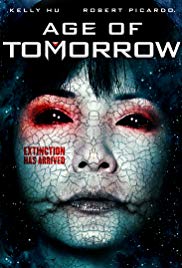 Storyline:
Mankind must fight to survive as Earth is invaded by hostile UFOs bent on destroying the planet. As the epic battle wages on, astronauts sneak aboard the mothership where they discover a portal to the aliens’ home world. They manage to alert Earth before they are brutally murdered. Left with no other choice, Earth sends an elite military team of science and combat specialists through the portal where they attempt to stop the invasion from the inside out. But is the battle already lost for humanity?
Written by
The Asylum
User Reviews: While "Age of Tomorrow" is not the most horrible of movies from The Asylum, then it is quite a far way from being top notch entertainment.

The story is about a massive meteor on collision course with Earth and the US military (of course) amass an expedition to send a small group of people out to blow up the meteor before it impacts with Earth (can you say "Armageddon" anyone?). But the meteor is not what it appears, and soon mankind finds itself in a battle for life and extinction.

Yep, that was basically it, and then throw in a few elements from "Starship Troopers" as well, and you essentially have "Age of Tomorrow".

The effects were actually adequate, and the aliens themselves were alright to look at. While the space-faring outfits of the people looked uncomfortable and like toy version, they were still on the right path with something interesting. If you have played the "UFO" games, then you will enjoy the outfits – just a shame that they didn’t put more effort into making them more realistic and actually look like military-grade armor.

Story-wise, then "Age of Tomorrow" wasn’t particularly impressive in any way. Everything was something that had been seen before in other Sci-Fi movies.

As for the acting, well, you know what you get here. And the only reason for me sitting down to watch the movie was because of Kelly Hu, but sadly her role wasn’t a big one.

The movie’s poster/cover makes it look a lot more interesting than the movie itself actually turned out to be.

There is very little to recommend in order to make you sit down and watch "Age of Tomorrow", so you might as well better spend your time, effort and money elsewhere.