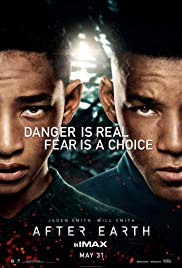 Storyline:
One thousand years after cataclysmic events forced humanity’s escape from Earth, Nova Prime has become mankind’s new home. Legendary General Cypher Raige returns from an extended tour of duty to his estranged family, ready to be a father to his 13-year-old son, Kitai. When an asteroid storm damages Cypher and Kitai’s craft, they crash-land on a now unfamiliar and dangerous Earth. As his father lies dying in the cockpit, Kitai must trek across the hostile terrain to recover their rescue beacon. His whole life, Kitai has wanted nothing more than to be a soldier like his father. Today, he gets his chance.
Written by
Columbia Pictures
User Reviews: What is going on with M. Night Shyamalan lately? I used to like him in earlier films like Unbreakable and Signs, but he hasn’t made the critics and audiences gifted as it would probably if his directing career is in serious jeopardy. One of the biggest and toughest question is that simple: Why is M. Night Shyamalan directing in a new post-apocalyptic adventure starring Will and Jaden Smith? Did he ever asked to direct After Earth or did Sony wanted to choose any director that Smith had previously worked for instead of Shyamalan? For those who don’t know, this is the first lowest-rated movie for Will Smith since 1999’s disappointing mess "Wild Wild West," one for Jaden since "The Day the Earth Stood Still," and another bomb for Shyamalan.

After Earth feels like a re-cut of "Battlefield Earth" (Ya know, the Travolta movie we don’t even care anymore) and sometimes half-"I Am Legend" and half-"Hunger Games." But to me, maybe it’s the whole Scientology thing that starts to ruin the whole story.

The story is ridiculous, poorly acted (Smith sounded like James Earl Jones), mediocre sci-fi elements. How can this movie be much worse? I wished the late Roger Ebert was here giving a harsh review on "After Earth." Bottom Line: It’s not going to be a big summer success, but it’s another letdown for fans of Will Smith. I’ll just pass on the movie instead of renting it on DVD.

Storyline:Katherine Ann Watson has accepted a position teaching art history at the prestigious Wellesley College. Watson is a very modern woman, particularly for the 1950s, and has a passion not only for art but for h...

Storyline:An American village is visited by some unknown life form which leaves the women of the village pregnant. Nine months later, the babies are born, and they all look normal, but it doesn't take the "parents" lo...

Storyline:Harry and Archie are released from prison ready to collect their Social Security. How could they get into trouble at their age? Let's count the ways; A parole officer who is a famous criminal groupie, Dead e...