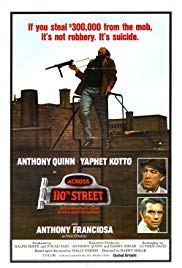 Storyline:
In Harlem, two Italian mobsters meet three black gangsters that work to the kingpin Doc Johnson to collect dirty money from their associates in an apartment building. Out of the blue, the smalltime thieves Jim Harris and Joe Logart knock on the door disguised as police officers to steal US$ 300,000.00 from the Mafia. However, they startle when the suitcase with the money falls on the floor and Jim kills the five men with a machine gun. They flee to the runaway car driven by Henry J. Jackson and they kill two policemen. The idealist NYPD Lt. Pope and the violent Capt. Mattelli investigate the case while the Italian Mafia and the black gangsters hunt the killers down. Will Jim Harris and his accomplices be found?
Written by
Claudio Carvalho, Rio de Janeiro, Brazil
User Reviews: Unlike in most reviews there are to find on "Across 110th Street", I will try not to participate in the debate about whether or not the film classifies as a genuine Blaxploitation effort. I will, however, elaborate as much as I can on all the things that "Across 110th" does represent  and that is quite a lot! This is a bona fide gritty, vile, uncompromising and unceasingly violent action-thriller from the glorious early 70’s. It’s a hardcore-to-the-bone tale of corruptness and survival with solid acting performances and a tight screenplay, yet without pushy morality lessons or unnecessary sentimental interludes. "Across 110th Street" is arguably the best Blacks Vs Italians thriller ever made, and this intervened with a strong story about two completely unmatchable cops that are forced to work together results in an unimaginably powerful and unforgettable movie; albeit one that only can be enjoyed by people with strong stomachs and nerves of steel as the bloodshed is relentless and the level of suspense is unremitting. Petty thief Jim Harris and his two accomplices decide to steal a large sum of money from the Italian Mafiosi that are running the show in Harlem. The heist goes terribly wrong, though, and Harris kills no less than five gangsters and two police officers. The Italians send their most lethal psychopath to Harlem and the black gangster community organizes their own manhunt as well. Meanwhile the police force deals with internal racial issues. The aging and corrupt but veteran Captain Mattelli is forced to hand over the investigation to Lieutenant Pope, who’s fresh out of university and still full of ideals. This is one of the grittiest and frighteningly realistic depictions of the crime-infested New York City district during the early 70’s. There are hardly any amiable characters in the entire film, the ambiance is constantly on the verge of depressing and the downbeat ending comes a massive slap in the face. The racial tension between the "main" police officer characters is always present and noticeable, yet moral values and speeches are never shoved down the viewers’ throats. The performances are incredible, particularly Anthony Franciosa as the crazed mafia killer and Paul Benjamin as the small thief turned murderer. But the utmost respect is for Anthony Quinn, for courageously illustrating a dismal and raw cop-character with his status in Hollywood. The soul soundtrack is amazing and the actual Harlem filming locations make the film all the more authentic. Barry Shear’s direction is surefooted and tight, and I can’t believe I haven’t checked out some of his other work yet. I still have a copy of "The Todd Killings" lying around, so I hope it’s as masterful as this film!