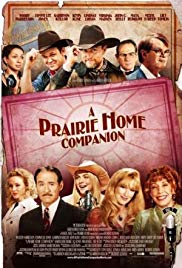 Storyline:
A final live variety show broadcast via radio becomes a metaphor for the natural order of life. A concept and script by Garrison Keilor uses every natural and technical element of working with a tight and close ensemble producing a weekly show to sooth us and guide us through the natural but difficult transitions of aging, becoming less relevant and then dying as new, young life develops and strengthens during our final “performances.” This is a rare film for it’s remarkable cast and crew and one wonders how the great Robert Altman was able to gather them all at the same place and time to shoot this film.
Written by
Dave Seaman
User Reviews: A Prairie Home Companion

In truth, I’m not one to worship Robert Altman. His filmsbarring the raritieshave been, for me, mostly inconsequential. They’re wispy and lighthearted and mostly nonchalant. They work, but on a momentary basis; acting like a bubble that bursts the second the lights go up. Most of the same can be said about A Prairie Home Companion. Only, this time is simply works better.

Garrison Keillor who penned the "A Prairie Home Companion" radio show also works the fingers behind the typewriter for its film adaptation. His script has a kind of "concentrated structure" to it; it’s duration running throughout "A Prairie Home Companion’s" final live broadcasted show. He balances onstage performance between backstage interactions, the camera smoothly swirling amongst the audience, the stage, and the inner workings of the theatre.

If Altman flashed the negative to achieve a washed-out look for The Long Goodbye, he did quite the opposite for A Prairie Home Companion. The cinematography is rich and sensational, often whirling between different sets in long, gorgeously extended shots. This isn’t your typical backstage DV debacle; but the work of a director at the very height of his career.

The cast is yet another stunning ensemble, most of them probably flocking to Altman’s direction. Beat this: Meryl Streep, Woody Harrelson, Kevin Kline, Lily Tomlin, Virginia Madsen, Tommy Lee Jones, Lindsay Lohan, John C.Reilly, and Garrison Keillor. Yeah. The beauty of the film is that none of these actors quite seem to be acting. Attribute this to Altman’s classic overlapping dialogue, but don’t forget to bow your heads to the performers as well. Often I’m annoyed by Altman’s stubborn persistence with overlapping dialogue. I’ll argue that when Altman should be trying to make cinema, he insists on imitating real life. But with A Prairie Home Companion, the overlapping dialogue is mandatory. Altman’s best when he’s making a film mostly about people and not about story. This is most obvious here. My one complaint with the film is its aversion to storyline. But this isn’t too much of a problem because A Prairie Home Companion is, if nothing else, about the people of the radio show. This is a story about human beings, where overlapping dialogue is only expected.

The story finds itself toeing the line with magical realism. Virginia Madsen plays The Dangerous Woman, who Guy Noir (Kevin Kline) first describes as a femme fatale, and later as an angel. As she convinces us of her divinity, Noir finds a way to use her as an assassin to ward off the buyers of the radio show. This fantasy element works only to heighten the vibrancy of the rest of the film, where feet stay firmly planted to reality. Meryl Streep and Lily Tomlin play the singing sisters Yolanda and Rhonda Johnson, with Lindsay Lohan as their gloomy daughter Lola. The three, as contrasting as the actors are on paper, flit about in a realm of familial nostalgia, with Lola penciling out her suicidal songs and scoffing beside their make-up mirrors. John C. Reilly and Woody Harrelson are Dusty and Lefty, the singing cowboys who crack dirty jokes backstage and jerk the chain of censorship with Al (Tim Russell), the stage manager. Chuck Akers (L.Q. Jones) and Evelyn (Marylouise Burke) are the elderly lovebirds who chase a potentially fatal lovemaking. And holding all these characters together is Garrison Keillor, whose nostalgia is matched only by his pragmatism and lack of sentimentality towards the show’s demise. His performance is probably the most memorable, as the picture is fuller when he strolls about within it, offering truth to the blind antics of some of the other roles with his endless cache of stories.

A Prairie Home Companion’s bubble doesn’t burst as the lights go up. Instead, we find ourselves wishing the show would go on and the performers keep up doing their crazy little acts. This is Altman in his element; where humans are meant to be portrayed as humans. It’s still lighthearted and mostly nonchalant, sure, but it’s also about nostalgia and reminiscence, and the beauty that surrounds a family built behind the red curtains and a WLT microphone.