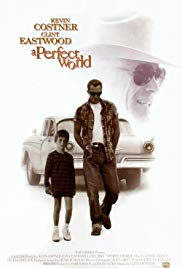 Storyline:
After escaping from a Huntsville prison, convict Butch Haynes and his partner Terry Pugh kidnap a young boy, Philip Perry, and flee across Texas. As they travel together, Butch and Philip discover common bonds and suffer the abuses of the outside “Perfect World.” In pursuit is Texas Ranger “Red” Garnett and criminologist Sally Gerber.
Written by
James Yu <[email protected]>
User Reviews: Some aspects of this film work better than others, but overall A PERFECT WORLD is a highly watchable film. Kevin Costner delivers a fine performance as escaped convict Butch Haynes. The film primarily focuses on the relationship between Haynes and an innocent 8 year old boy named Phillip whom he kidnaps and befriends (well played by TJ Lowther). Haynes has killed two people thus far and gives the impression of a being a loose cannon, but Eastwood evokes sympathy for the character as the audience learns about Haynes troubled childhood (raised without a father by a prostitute mother – killed a man by the age of 8) and observe his genuine care and concern for the boy. Their relationship is reminiscent of Allan Ladd and the young boy in SHANE. As he slowly feeds us more information about Hayne’s history, and lets the audience wrestle with its ambivalent feelings towards Costner’s character, Eastwood keeps the film moving with lots of close brushes with the law, car chases and shoot’em ups.

Where the film doesn’t work quite is when Eastwood himself is in front of the camera, playing a minor role – Chief Red Garnett – a Texas Ranger who’s in charge of Haynes’ capture. The primary function of his character, and Laura Dern’s (who plays Sally Gerber – a criminologist the Governor forces upon the Chief) in the script is to supply further information about Haynes’ past. Unfortunately, Eastwood tries to flesh out the relationship between these characters through antagonistic chauvinist attitudes towards Gerber and creating a power struggle between the two which (big surprise!) over the course of the film, gradually leads to a mutual respect between them! Granted Eastwood and Dern have marquee value – especially Eastwood, are fine in their roles, and, of course, chauvinism was alive and well in 1960’s Texas, but I mostly found these minor subplots annoying and unnecessary. It’s the scenes and issues focusing on Costner’s character that are the life blood of this picture. This criticism aside, Eastwood does a solid job directing, weaving action, suspense and thought provoking human drama into a well knit weave and Costner delivers one of the best acting performances of his career.