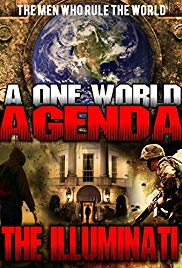 A One World Agenda: The Illuminati (Video 2015)

Storyline:
There is an elite group that controls the world. They run governments, companies and religions. They control much of what you see, hear and perceive and have done so for a very long time. Their names have changed, their faces altered but their bloodlines remain the same. We see glimpses of their great and far reaching power, we see revolutions and war, and we succumb to their propaganda and manipulation again and again. Most have no idea that they are under the spell. In the 18th century, they emerged into the spotlight briefly to bring about world-wide cataclysmic change and they called themselves the Illuminati. Quickly they spread and embedded themselves and their ideals within other secret societies and have infiltrated every aspect of society on all sides of the fence. This is the story of the world’s most powerful secret and sacred order.
User Reviews: Labels itself as a documentary, but it plays more like high fantasy. They stack assorted writings with little to no story line styled thread. As if they had someone read the disjointed notebook of a conspiracy nut.

The visuals are awful. They present stock images of prayer or art in a slideshow format with nothing linking one topic to another. These are punctuated with what I assume is original 3D models made with tech that would be considered bad in 1995.

I am a skeptic. I do not believe in any of this illuminati nwo nonsense. However, I do enjoy watching some of these things in a fantasy frame of mind. Most of them are not great, but this is new levels of bad even by the low low standards of the genre. Go watch some YouTube vids, better production values.