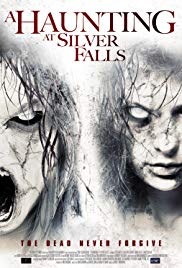 Storyline:
A small town is haunted by the twin daughters of a wrongfully convicted man. Young Jordan is sent down the path to who the real killer is, only to find the killer is very close to her.
User Reviews: Moving to a quiet suburb after her parents’ death, a teenage girl finds herself embroiled in a mystery by a pair of twin ghosts to solve their murder they may or may not be connected with her distant relatives she just moved in with.

This is a rather enjoyable enough Lifetime Channel ghost story even if it’s pretty familiar and generic most of the time. As far as these general types of ‘Righting Wrong’ style of ghost movies go, where they appear to someone in a plea to fix a mistake seen by many in the community who are grossly misled by the real perpetrators or part of it themselves, the horror comes from the fact that there’s plenty of ghostly encounters out of nowhere or strange shocks that come up, but then drop off in order to invest in the mystery surrounding everything and finally at the end bring everything to a conclusion. That’s how this one plays out, and it certainly hits those familiar notes quite well and often in the beginning which usually pulls out the clichéd notion of the victim thinking they’ve gone crazy constantly seeing ghosts everywhere which does make for this one being so run-of-the-mill and ordinary during this main section of the film. That the mystery this one becomes embroiled in has a pretty gruesome story at the center of it all does help the middle going while the teens investigate this and holds off the ghostly encounters until the end when the real culprit comes forward and centers the film around that new-found angle and brings back the ghostly happenings in a fun if admittedly dry finale. There’s not a whole lot of real true horror in this one in terms of bloodletting, gore, dead bodies or such as the ghosts’ preference is to help initiate the investigation into why they’re there and killing off the one who’ll do that won’t help matters, so as long as that factor isn’t an issue, this is a fine effort.