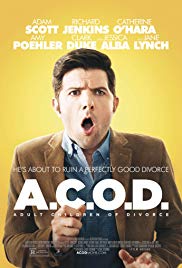 Storyline:
A.C.O.D. follows a seemingly well-adjusted Adult Child of Divorce (Adam Scott) who is forced to revisit the chaos of his parents’ (Catherine O’Hara and Richard Jenkins) bitter divorce all over again after his younger brother (Clark Duke) decides to get married.
Written by
The Film Arcade
User Reviews: "Them together is bad for everyone, especially me." Carter (Scott) has settled into his life as an Adult Child Of Divorce. He has a girlfriend he likes and a restaurant he owns. When his brother Trey (Duke) informs him of his engagement things begin to fall apart for Carter. First he has to try and get his parents to talk to each other so the wedding won’t be ruined. Then he must keep them from getting back together for his sake. Going in with that cast I was expecting a hilarious comedy that I would be laughing at the whole time. While this was a good movie and I did like it it wasn’t nearly as funny as I was expecting. There are some funny parts in this but it wasn’t the laugh riot I was expecting. This is more about the selfishness of one person and how he messes with everyone’s life to make him more comfortable. There is some very funny moments in this but hard to make that plot hilarious. Again though this is a good movie and worth seeing but do not expect the laugh-out-loud comedy I did. Overall, good and worth seeing but not super funny. I give it a B.