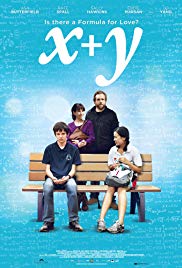 Storyline:
In a world difficult to comprehend, Nathan struggles to connect with those around him – most of all his loving mother – but finds comfort in numbers. When Nathan is taken under the wing of unconventional and anarchic teacher, Mr. Humphreys, the pair forge an unusual friendship and Nathan’s talents win him a place on the UK team at the International Mathematics Olympiad. From suburban England to bustling Taipei and back again, Nathan builds complex relationships as he is confronted by the irrational nature of love.
Written by
Anonymous
User Reviews: In my reviews I have observed on more than one occasion that the Brits don’t know how to make a bad film. Their challenge is usually in making a great film.

This is a case in point. Technically perfect, with a script so polished it gleams, and acting so sharp that even the secondary roles stay in your head long after the credits roll.

Butterfield’s character is a young boy with Autism who, as a result, may or may not be a world class math prodigy. The point of the story however is not whether his character will win a math Olympics but rather if he will ever become a functioning human being.

Butterfield, in a cast of greats, stands out. Has a great career ahead of him, he has mastered the art of delivering dialog with his eyes.

The wonderful Sally Hawkins (Poppy in the unforgettable Happy Go Lucky) does a great job in a difficult role as the mother. Since Butterfield’s character as written is constantly ignoring his mother, there is a tendency for the audience to do so as well. Hawkins does not allow this.

It is an excellent film, more a journey than a destination, and therefore not for everyone.

My favourite scene — the one I will remember for a very long time — is Butterfield with his (almost) Chinese girlfriend, eating some take-out.

The container is opened and the number of comestibles inside is NOT a prime number. The audience (by that point) has been trained to know this will be a cause of great discomfort for the boy, who likes his meals pre-sorted in prime numbers.

The girl notices his discomfort and he quickly explains the problem to her. With no hesitation she grabs one of the items and wolfs it down happily.

Problem solved! It is a microcosm for the film – start with an impossible boy, add a naturally joyful and spontaneous young woman, and the result is … serendipity.

Storyline:Tae-il is a low-level thug who goes around the streets of his neighborhood in Gunsan, collecting debts for a loan shark and harassing shop owners for the protection money owed to the small gang he works for....