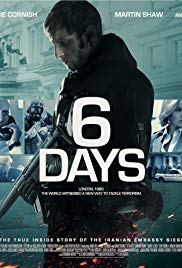 Storyline:
In April 1980, armed gunmen stormed the Iranian Embassy in Princes Gate, London and took all inside hostage. Over the next six days a tense standoff took place, all the while a group of highly trained soldiers from the SAS prepared for a raid the world had never seen.
Written by
GFC
User Reviews: "The Prime Minister wants the world to see how this country deals with terrorism" And the world saw it. The film is not bad, it has some tension but we know in advance everything that will happen so we can not talk about suspense, everything is predictable. Personally, I would have liked to be more dynamic, more spectacular. No acting performance out of the ordinary, all actors just do their job to get their pay.