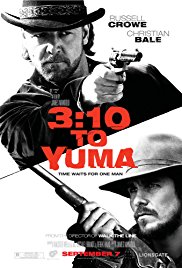 Storyline:
Rancher Dan Evans heads into Bisbee to clear up issues concerning the sale of his land when he witnesses the closing events of a stagecoach robbery led by famed outlaw Ben Wade. Shortly thereafter, Wade is captured by the law in Bisbee and Evans finds himself one of the escorts who will take Wade to the 3:10 to Yuma train in Contention for the reward of $200. Evans’s effort to take Wade to the station is in part an effort to save his land but also part of an inner battle to determine whether he can be more than just a naive rancher in the eyes of his impetuous and gunslinging son William Evans. The transport to Contention is hazardous and filled with ambushes by Indians, pursuits by Wade’s vengeful gang and Wade’s own conniving and surreptitious demeanor that makes the ride all the more intense.
Written by
commanderblue
User Reviews: Long ago, I saw the original 3:10 to Yuma featuring Van Heflin and Glen Ford, but I don’t remember it well enough to compare it with James Mangold’s new remake. Instead, my review will focus exclusively on the new film.

Mangold’s film is a tense, traditional western based on an Elmore Leonard story. Leonard is a solid writer, and gave the material upon which the film is based enough background and characterization to permit willful suspension of disbelief. Mangold’s film does the same. Our protagonist and antagonist are, respectively, Dan Evans (Bale) and Ben Wade (Crowe). Evans is a would-be rancher and family-man whose family is suffering from a drought and a merciless landlord. Evans and his boys cross paths with notorious outlaw Ben Wade and his gang on their way into town to confront their landlord, and Wade whimsically lets them go. But the connection between these two men and Dan’s eldest son is far from over. Eventually Dan will accept an offer made by a railroad agent to help escort Wade to a train headed to Yuma prison, while Wade’s crew of murderers dogs their every step.

Two performances stood out for me – Bale and Ben Foster (Charlie Prince). Crowe was good, but it’s not clear that he engaged with his role with his usual intensity. There are several very talented actors in supporting roles, and they each pull off the transition to the western genre quite nicely (Alan Tudyk, Logan Lerman, Gretchen Mol, Peter Fonda and others). The film showcases the acting talent very well without losing sight of its straightforward but interesting story.

More often than not, good westerns are at least as much character studies as they are ‘shoot-em-ups’. After all, it pretty close to impossible to enjoy a film in which anybody might drop dead at any given time without caring about the people you are watching die, or those doing the killing. Mangold achieves this by drawing on the simple strengths of the original material and allowing relationships to dominate both the story’s development and the cinematography. For a western, there is a tremendous amount of dialog in this film, coupled with the usual meaningful stares. Wade is so wily and unpredictable that you really never know what to expect out of him, and his crew is headed up by his loyal and equally nihilistic protégé Charlie Prince. Dan Evans is his polar opposite, and Dan’s son is an unusually accurate and complex Hollywood portrayal of a teenager. These and other relationships are the strengths and the medium of the film. When the camera isn’t being used to build tension before a battle or showing us a gun-fight, it is establishing relationships and character. And many of the characters and relationships we see are surprising, ambiguous and more than a little ironic.