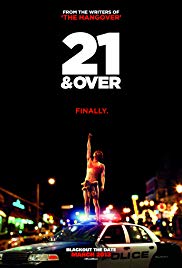 Storyline:
When Straight-A college student Jeff Chang’s two best friends take him out for his 21st birthday on the night before an important medical school interview, what was supposed to be a quick beer becomes a night of humiliation, over indulgence and utter debauchery.
Written by
Relativity
User Reviews: If the "The Hangover" and "Project X" were fused together to make one new film, the result would be "21 and Over." From the same writers of the Hangover, Jon Lucas and Scott Moore, "21 and Over" is a film that taps into the college demographic by concentrating on some of the issues that affect a lot of students throughout the United States — binge drinking, beer pong games, sex and parties.

This comedy follows three best friends who have fallen out of touch since graduating from high school and transitioning into college. They try to meet up on important occasions, in this case Jeff Chang’s (Justin Chon) birthday.

Jeff Chang is finally turning 21 and with that age his best friends, Casey (Skylar Astin) and Miller (Miles Teller), believe comes a new stage in Chang’s life; one filled with alcohol and girls.

Chang is a straight-A student who is preparing for an upcoming interview to gain admittance to medical school. In addition to his med school interview, Chang has to worry about his strict father who expects him to follow his family’s legacy in becoming a doctor.

For his 21st birthday, Casey and Miller surprise him and take him on a night out. Chang agrees to go out on the condition that they only go for a few drinks and then return home.

They start the night off with a round of drinks, but soon enough begin club hopping, drinking alcohol everywhere they go. The night takes an unexpected turn when Jeff Chang becomes unresponsive after overdrinking.

Following the same formula used in "The Hangover," "21 and Over" attempts to win audiences over by using a lot of crude humor including many physical jokes.

Miles Teller (Miller) takes most of the spotlight with his straightforward dialogue and comedic timing. Justin Chon (Jeff Chang) further pushes the comedy bar with his use of physical humor. Skylar Astin (Casey) plays the typical preppy and awkward sidekick.

Even with a pleasant cast, the film fails to present anything original or creative. While it offers a few laughs, too many scenes are either lackluster, or exaggerated, and some of the humor is forced.

"The Hangover" was much more imaginative than "21 and Over," which has fewer plot twists and a rushed ending.

Even worse, the film reinforces all possible stereotypes including the smart Asian, the party alcoholic white male, crazy Latinas, and out of control college students.

The film is far from a masterpiece. However, if one day after a long day of class or work you simply want to have a few brainless laughs with friends, then "21 and Over" may be the movie for you.