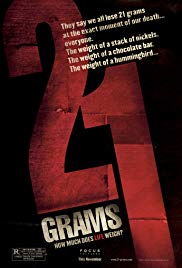 Storyline:
This is the story of three well-meaning but flawed people: Paul Rivers, an ailing mathematician lovelessly married to an English émigré; Christina Peck, an upper-middle-class suburban housewife, happily married homemaker with two young daughters, with hiding a secret past; and Jack Jordan, an ex-convict who has found in his Christian faith the strength to live a law-abiding life and raise a family. They will be brought together by a terrible accident that will change their lives. By the final frame, none of them will be the same as they will have learnt harsh truths about love, faith, courage, desire and guilt, and how chance can change our worlds irretrievably, forever.
Written by
Miguel Cane ([email protected])
User Reviews: Many movies in the modern era have experimented with fractured chronology, but most of the time this technique is used for entertainment purposes only. "21 Grams" is an intense and thoughtful film enriched by this technique, taken to an extreme I’ve never seen before. We’re not talking "Pulp Fiction" here, where a small series of vignettes are arranged out of sequence. Every individual scene in "21 Grams" seems to be distributed almost at random anywhere in the film. You have to concentrate when seeing this film for the first time, because you’ll have trouble figuring out what’s going on, and even as a plot starts to emerge, some of the details won’t be understandable until the very end. But it pays off: this isn’t like "Memento" or "Mulholland Drive," where you may need multiple viewings to understand it all. By the end of this film, the story turns out to be quite straightforward. It’s like seeing a gigantic jigsaw puzzle gradually pieced together.

Unlike many other films that use this sort of device, "21 Grams" is a character drama, not a psychological thriller. The story would still work if it were told in chronological order. Why the scenes are arranged as they are is not altogether clear, on the surface. I felt like I was watching a mystery, but after everything came together it became evident that none of the mystery was contained in the plot itself. This fact has led some critics to suggest that the scrambled scene arrangement is nothing more than a cute gimmick designed to make the film more engaging. But I believe that the device does serve a legitimate purpose, by drawing out the complexity of the characters and their situations.

Life is not good for the three principal characters, and it isn’t getting better. Sean Penn plays a 40-something man with a failing heart, Naomi Watts plays a young woman facing great tragedy, and Benicio Del Toro plays an ex-con consumed by guilt. Penn and Watts come off as ordinary individuals reacting as anyone might under the circumstances, but Del Toro’s character is particularly fascinating. He’s been rehabilitated through religion, but he’s still far from perfect. As a father, he has a scary presence that makes him seem borderline abusive at times. But he has developed a powerful conscience. Is he right to hate himself for what he did? The movie never answers that question. I just appreciated that the film resisted the temptation to make him into a caricature. He is neither hero nor villain. He is simply understandable on a very basic human level, as are the other two characters.

We have the feeling that Watts and Penn are wrong to condemn him as strongly as they do. They do not understand his situation, or that he’s suffering just about as much as they are. On the other hand, we as viewers can perfectly understand where Watts is coming from. That’s what makes the scrambled scene arrangement so effective: it never allows any one character to gain our total sympathy. By the time we’ve sorted out the plot threads, we’ve identified with all three characters on an emotional level while at the same time understanding their faults. These people are trapped in their own limited worlds, and with our omniscient viewpoint we can scarcely blame any one of them for their feelings or actions. We can see clearly what these characters cannot, which is that they are more victims of cruel fate than people who are truly guilty of anything.

What is the movie’s message? That people shouldn’t be so quick to judge others? That could be one interpretation, but what’s nice about the film is that it doesn’t hammer this lesson into us. It just tells a moving and stirring tale about complex characters, and viewers can take from it what they please. The title refers to a parapsychological belief about the weight of the human soul, and it’s used in this film as a metaphor for the fragility of life. If life is fragile, then it’s also precious, and people need not waste their time on vengeance.