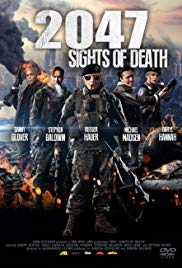 Storyline:
The year is 2047. Our planet is ruled by the repressive Confederate Central Government (CCG). Ryan is a Green War rebel agent sent on a mission by Sponge (Danny Glover) to collect evidence against the CCG for its heinous crimes. Ryan soon faces the sinister Colonel Asimov, Major Anderson and a group of mercenaries lead by Lobo. Ryan’s mission quickly turns chaotic when he meets Tuage, a mutant survivor of the CCG rebellion who swears to help Ryan save what is left of their world – or does she?
Written by
remi
User Reviews: Now I have seen some total rubbish films, especially on the Syfi channel in the afternoons, how many disaster movies can there be with the lone American saving the world? However this one takes the golden Turkey prize. I wont go into the plot, or lack of one, it’s a rehash of better ones you’ve seen in the past.

I find it hard to believe these respected actors needed the money so badly they had to be involved, well maybe Darryl Hannah did. Her performance was comical, when she first came on the screen wearing that hat I nearly chocked with laughter, is this a spoof movie I thought? Sadly no, I tried for almost an hour to find something redeeming, perhaps the script looked better on paper than it did when it hit the screen.

Avoid at all costs!

Storyline:Dr. Wendell is a troubled surgeon with a nagging wife, Carol, and a stressful hospital job, who botches a surgery on an injured young man, Johnny, who then dies under his care. The man's dangerously disturbe...