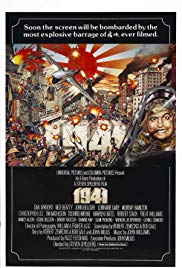 Storyline:
Hysteria grips California in the wake of the bombing of Pearl Harbor. An assorted group of defenders attempt to make the coast defensible against an imagined Japanese invasion, in this big budget, big cast comedy. Members of a Japanese submarine crew scout out the madness, along with a Captain in Germany’s Kreigsmarine (Navy).
Written by
Keith Loh <[email protected]>
User Reviews: Steven Speilberg once asked a friend of mine, "Why didn’t anyone like this movie?" Well, I think that I can answer that – "1941" is a gigantic in-joke. The people who are in on the joke are people who, like myself, have an oversized love and knowledge of the city of Los Angeles and it’s history. I think that in the vast, world-wide movie-going public, this group probably comprises 1%. For that group, "1941" has a wonderful nostalgia value. And for the people in that 1% that have a twisted sense of humor and enjoy seeing nostalgic L.A. blown to bits, this movie really delivers. By the way, the folks with that twisted sense of humor probably account for about 1% of the original 1%.

I don’t know why, but having grown up in L.A. and being an aficionado of it’s history, I find it funny to see planes in a dogfight over Hollywood Blvd, the ferris wheel rolling off the end of Santa Monica Pier, and aircraft crashing into the La Brea Tarpits. But for non-locals and people unfamiliar with the paranoia that gripped Southern California in the wake of Pearl Harbor, this movie will likely seem confusing and silly. To the history buff with a twisted sense of humor (like me, proud member of the 1% of the 1%), the movie is not only amusing, but sometimes surprisingly accurate, historically. Robert Stack plays General Joseph Stillwell – a very real historical figure in L.A. history. Stack even bears a striking resemblance to the real General Stillwell. The whole movie is based upon a few real-life incidents of panicky anti-aircraft fire that occurred over L.A. in 1941/1942, as well as a Japanese sub that actually shelled an oil refinery near Santa Barbara. Like "Chinatown" (a film mistakenly thought to be an accurate account of L.A. water politics in the 1930s), "1941" borrows from real-life history and distorts it into pure fabrication. The difference is that while "Chinatown" is a noir drama, "1941" is an over-the-top comedy. Both films appeal to the historian, but as it is often said, comedy is much harder to pull off than drama. You either love "1941", or sit though it, saying, "huh?".

Storyline:The infamous World War II cat house, The Pink Flamingo, is the setting where Frances, the warm-hearted madam, caters to the sex starved servicemen. Includes nostalgia, via the sets and period music, and a st...

Storyline:After starting her first job at a country club restaurant, Callie’s passions for cooking and ice sculpting are met with romance and Christmas spirit when a childhood friend enters her into the club’s annual ...

Storyline:25 years later after the events of Samurai Cop (1991), Detective Frank Washington is forced to team up with his long estranged partner Joe Marshall to solve a series of assassinations being committed by a se...

Storyline:San Francisco's premiere wedding planner, Mary Fiore is rescued from an accident by the man of her dreams, paediatrician Steve Edison, only to find he is the fiancé of her latest client. As Mary continues ma...