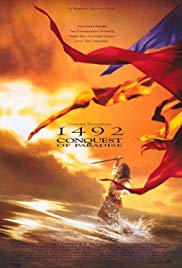 Storyline:
Big budget account of Christopher Columbus’ discovery of the Americas. Released in 1992 to celebrate the 500th anniversary of the discovery. Shows the disastrous effects the Europeans had on the original inhabitants, and Columbus’ struggle to civilize the New World.
Written by
Rob Hartill
User Reviews: 1492: Conquest of Paradise is directed by Ridley Scott and written by Roselyne Bosch. It stars Gerard Depardieu, Armand Assante, Fernando Rey, Sigourney Weaver, Michael Wincott and Tcheky Karyo. Music is scored by Vangelis and cinematography by Adrian Biddle.

"500 years ago, Spain was a nation gripped by fear and superstition, ruled by the crown and a ruthless inquisition that persecuted men for daring to dream. One man challenged this power. Driven by his sense of destiny he crossed the sea of darkness in search of honour, gold and the greater glory of God."

It barely made a dent at the box office, but neither did the other big Columbus release in 1992, Christopher Columbus: The Discovery. Meaning what? Both films are bad? Or that many went to see one that was bad and thought better than going to sit through another Columbus epic? Or maybe the topic, the anniversary of Columbus’ voyage to the New World, just hadn’t got the appeal that studios hoped for? All possible, but in the case of Ridley Scott’s 1492: Conquest of Paradise, the lukewarm response is probably born out of it being a different kind of movie than that which was expected.

This is no rousing epic that’s full of derring do and swagger, it’s over talky for the non historical movie loving crowd, and crucially it goes against the grain of what Columbus, we are now led to believe, was like. It seems that Scott and Bosch were more happy to paint the famed explorer as a noble man of the people, a man of science, keeping his motives vague and his actions as dignified. With hindsight, it surely would have been more interesting to have had a Columbus picture portraying him as the self driven bastard he’s been accused of being! I wonder how many more people would have paid to see that?

Film is not helped by Depardieu’s performance as Columbus. Acting on direction of course, the restrained portrayal leaves the film without an heroic, passion fuelled edge, something that is badly needed in a film about such a momentous historical occasion. His fluctuating accent is also a nuisance. There’s no doubting the professional performance the Frenchman gives, it’s just in the wrong place at the wrong time. The other cast members jostle for screen time with mixed results, but Assante, Karyo and Wincott are good value for money. But they, like Depardieu, pale in the shadow of Scott’s aesthetics.

This is where the film is a real winner. From the medieval make over for a moody Spain; to the capturing of ships setting sail from Port of Palos under an orange sky; to the wide angled shooting of Costa Rica, Scott and Biddle delight the eyes. When Bosch’s screenplay allows, Scott is able to construct some truly indelible sequences, with garrotings, flaming pyres and a village assault serving notice that all is not lost here. But these, along with an extended sequence of men in unison trying to erect a giant bell, only make us notice just how much of a wasted opportunity this was. While Vangelis’ stirring score also has one hankering after a narrative with more momentum.

Big flaws and frustrating, but not a complete disaster for those armed with the knowledge that this is no rousing and devilish experience. 6/10

Storyline:Klara who is thirty-three years old. She is an interpreter in the French Army. After experiencing the horrors of war in Syria, she was transferred to Nice as part of Operation Sentinel. There, with her mothe...

Storyline:Ex-gangster Fernand (Lino Ventura) receives a call from a dying friend, a mob boss nicknamed "The Mexican". The doomed mobster talks Fernand into taking care of some criminal business and looking after his s...

Storyline:The young warrior indian Tainá must now battle against biopirates, and is joined by a new boy from the big city and an indian little girl who wants to follow her steps as a protector of the jungle.User Revie...

Storyline:In June 1944 the Allies invade German-occupied France in Normandy. The infamous, veteran 2nd SS Panzer Division Das Reich heads towards Normandy to shore up the defenses and counter-attack. On its way to the...

Storyline:The day he is released from jail, Serge is expected by four killers sent by Count Charles Varèse assigned to make him confess where he has hidden the jewels stolen during his last stickup. On the other hand ...