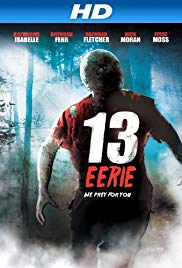 Storyline:
Six forensic undergrads embark on a scientific expedition to a remote island that was once used as illegal biological testing grounds for life-term prisoners.
User Reviews: I’m always looking forward to seeing a horror film that stars Katharine Isabelle. You will recognize her if you’ve seen Ginger Snaps and/or American Mary. So I was really looking forward to watch 13 Eerie. Unfortunately, there’s not much to see in 13 Eerie. SIDENOTE: If you’ve read my reviews in the past, you know how much I hate the skeptical character in films. It’s that character that needs convincing through the whole first half of the film. Ugh, its such a slap in the face to the audience. It was fine for horror films to have that character decades ago, but it’s 2013 now. Filmmakers need to take in consideration how desensitized their audiences is to horror story lines. We know scary things happen, that’s why we watch horror we want our characters to know that too! Get with the program horror movie characters, scary sh*t happens just accept that and start running! In 13 Eerie, there is way too much skepticism in the first half of the movie. It really brings the pace of the movie down. Once you get passed being annoyed by all the doubting, then you realize this is your basic "Night of the Living Dead" style zombie film, only it takes place around an abandoned where death row convicts rise from the grounds. There is honestly nothing special in 13 Eerie you haven’t already seen if you’ve been watching zombie movies in this century. I’d say that the only interesting component is Katharine’s character. She plays her usual bad-ass, heroine character. I also really liked the bus scene where they try to get away. That was pretty entertaining and the ending was as well. Overall, not too much to get excited about, but entertaining enough to give it a shot. Long story short: don’t pay more than a dollar to rent or just wait for a streaming release.

Please like me on Facebook! You can read more of my reviews and get info on the latest movies in horror: http://www.facebook.com/pages/I-Heart-Horror/338327476286206

Storyline:Torture is the ultimate seduction when Victor, a powerful and dangerous millionaire, discovers that his beautiful wife Elizabeth (Kristy Swanson) is having a steamy affair with his best friend. And when the ...

Storyline:In 1458, five years after the fall of Constantinople to the Moslems, eighteen cardinals meet to elect a new pope. Rodrigo Borgia, a 27 year old cardinal learns to play a very dangerous game.User Reviews: