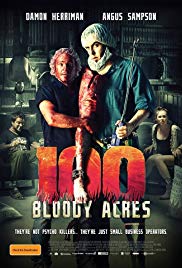 Storyline:
The use of dead car crash victims in the Morgan Brothers’ “Blood and Bone” fertiliser has been a huge boon to business. But it’s been months since their last find and an important new customer is waiting on a delivery. When Reg Morgan, the junior partner in the business, comes across three young people stranded on a remote country road, he sees a radical solution to their supply problems, and a way of finally gaining the respect of his bossy big brother, Lindsay. But things don’t quite go to plan when Reg starts forming an attachment with one of their captives, Sophie. Reg must now make a decision: go through with the plan and finally win Lindsay’s approval, or save the kids and destroy everything the brothers have worked for. They’re not psycho killers… they’re just small business operators.
Written by
Colin & Cameron Cairnes
User Reviews: ONLY 4 users IMDb for a great indie from down under. Wow, I can’t believe that. This film is fantastic and as far as comedy horror is concerned, one of the best. You can rank this one right up there with Society, Sleepaway Camp 2, Some guy who kills people and the very underrated Chopped. Down under have really given us some great celluloid over the last 5 years or so and this film is no exception. The acting is the best I’ve seen for this kind of film and the special effects are great. 100 bloody acres is a cross between Lunchmeat/TCM and just about any roady horror film of the last 10 years or so but what I loved about this film was it didn’t stop being fun. You actually like the characters and speaking of characters Ms. McGahan you are absolutely gorgeous……

Storyline:A group of people get trapped in a supermarket after a tsunami hits the coast of Queensland, Australia. But they soon find out that they have more to worry about than being in a flooded grocery store - there...

Storyline:When a group of misfit teenagers encounter an ancient relic during a school trip, they find themselves caught up in a magical world, with elemental powers beyond their belief, and the responsibility of stopp...

Storyline:Benoît is a coward and a voyeur, who gets his kicks from watching other couples make out. He cajoles his two new companions to attempt what he has never dared do: rob the safe in his father's factory, seduce...

Storyline:A look at the life of renegade yakuza, Rikio Ishikawa, particularly the years from 1946 to 1950 when his violent antics get him in trouble with his own clan, Kawada, and then with the clan of his protector, ...

Storyline:Kane and Darren are two 'rag and bone men' who have lived in the outer suburb of Boronia all their lives. Now as they approach their early thirties, they decide that it is time to leave their comfortable sub...

Storyline:The island of Ambon in Indonesia, 1945. During the War, the number of Australian POWs on the island had dropped from 1100 to less than 300 due to abuses by their Japanese captors. Capt. Cooper is the chief p...