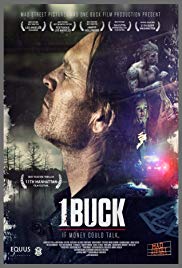 Storyline:
Shifting from one pocket to another, from one man’s drama to another, a lowly dollar bill, ‘one buck’ takes us on an odyssey through the heart of a forgotten town in Louisiana.
User Reviews: This film has a great idea: following a dollar bill as it changes hands, through a cast of mostly dysfunctional gritty characters, through a tale of murder, alcohol, sex, redneck racism, and drugs in Louisiana. What’s not to like?

Only a few things:

3. Wiggle-cam (not enough to induce nausea, but definitely enough to be annoying, intrusive, and an affectation).

This is one of those films where it’s hard to tell what’s worse, the acting or the script.

The cinematography is well crafted at times, if you can see through the wiggle-cam, but not enough to redeem the rest.

I sat through the whole thing, but it was difficult.